A Human in Brisbane, Australia

After the normal setup, configure InfluxDB uploading to look like this:

To SQL heads, this is a bit of a messy and sparse. But it turns out best for InfluxDB and Grafana because of the power of tags.

It’s also worth doing any simple arithmetic at this stage to ease life later. This is useful for multiple-circuits-of-one-type and sub-boards. For solar setups, it’s helpful to report the export and import separately, based on the a CT on the supply cable as follows. The odd maths is a sneak to simulate a “if less|more than zero” function. More on this below. For example:

It’s better practice to use one database for many iotawatts, but can be confusing. Note there are security implications. Experts only! 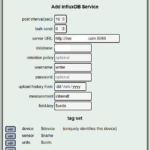 Naming of Circuits to Ease the Pain

One option is to identify circuits with a prefix (“Circuit”), in order to be able to use Regexs later. However, this turned out to be a furfy because it’s confusing, error prone and, most importantly, produces hard-to-read names.

So instead, I do this:

Here is an example:

Note the convention for positive and negative. Technically for a control-volume /  energy balance approach, all production should be negative. Then you can sum everything and get zero. However, it is confusing for people when you graph things later. So I made everything positive. The exception is Incomer (aka Net) which can be positive (importing) or negative (exporting). This is a bit hacky, but conforms to current norms and people’s expections.

To implement this, there are some tricks:

We’re got data in InfluxDB and could just graph that directly. That’s good for fine-grained, recent data. But for longer-term data we don’t want to continuously be summing from power-to-energy. So we create a Continuous Query to do this:

This creates hourly energy data with the right tags. It integrates power over time. Some tests shows much better performance and memory usage in InfluxDB using this method, particular for “Total Energy” type queries.

The “resample” syntax forces the query to run every day and  process the last 30 days’ data. This processes data uploaded in bulk after an outage. The “kwh_h” query does the same thing, but runs every hour to keep the dashboard up-to-date.

Watchout for a gotcha: if you don’t have data for an interval, the integration will continue the last know value as constant. This can result in overly large (or small) values. This is a known InfluxDB problem. The fill(0) is ignored in the continuous queries. The only solution is to write a complex query to backfill unknown values with 0.

So all the data are in the database, nicely tagged, and we’ll find that graphing is easy. It’s a standard connection to InfluxDB, and pretty straightforward to graph simple metrics. Here are some of the trickier bits

Limiting unnecessary hits on the database

Working with power versus energy

Using templating for flexibility and re-usability.

My workflow is currently:

If you have named the CTs nicely, you can create a multi-value variable which contain a list of the categories. Sum them to confirm they equal the total incomer and total sum of individual circuits. This is often more trouble than it’s worth, but cool:

# … sum of categories should equal …

# … should equal sum of circuits …

Find the % of a arbitrary target (kwh/day). Note sometimes it’s necessary to force the timezone to be appended (use a fixed variable). This appears to be a bug.

Based on current time period, how much are your yearly bills? ($1 per day + $x per kwh)

Based on current time period, how much are your quarter bills? ($1 per day + $x per kwh)

If you name your outputs from IotaWatt such that they are separable by RegEx-s (see table of names, above), then you can use dynamic variables (“Query Variables”) to produce – dynamically-  lists of outputs to graph in Grafana. For example:

The magic is the query:

which produces a list of all outputs from iotawatt (stored in “ct”) for a device (another, constant, variable) which starts with “Cat”. This will work when you reuse the dashboard, provided the output names (eg. CatPower) are correct. Note that “A template variable of the type Constant will automatically be hidden in the dashboard, and will also be added as an required input when the dashboard is imported.” Therefore, use “Constant” to get it exported.

Alternatively, use a “custom” variable and manually edit the values. Get these from influx: